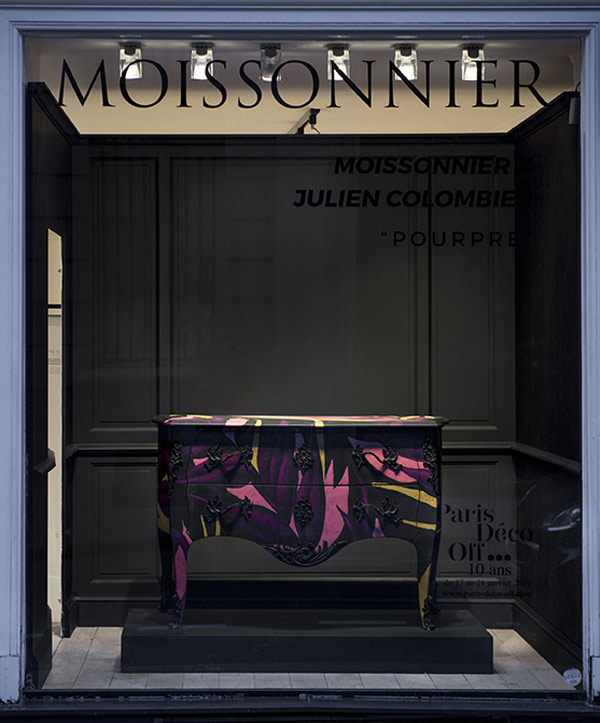 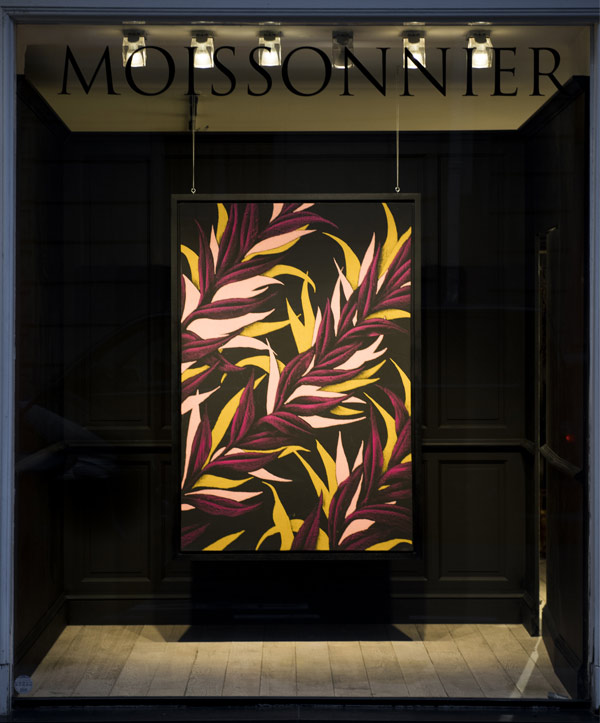 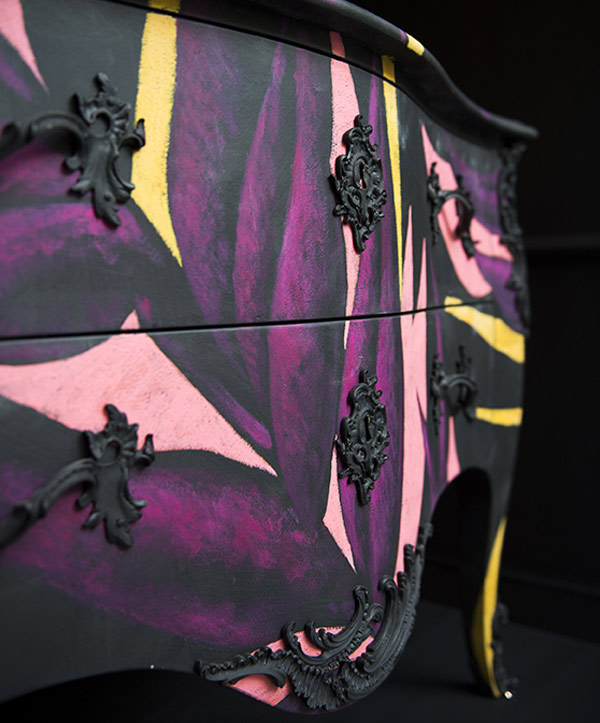 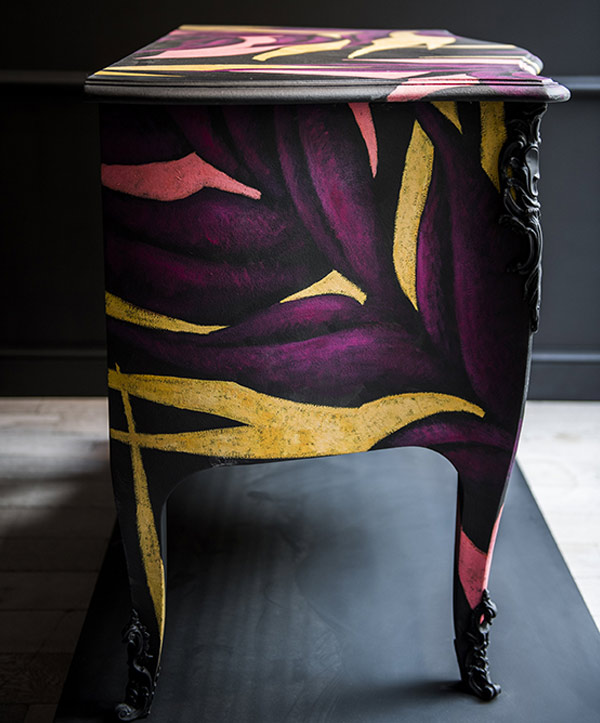 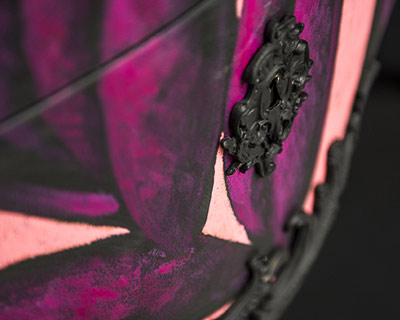 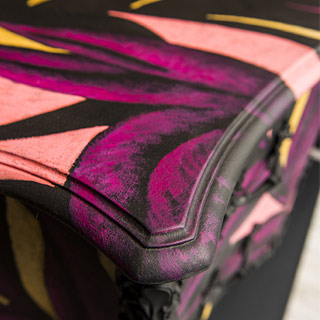 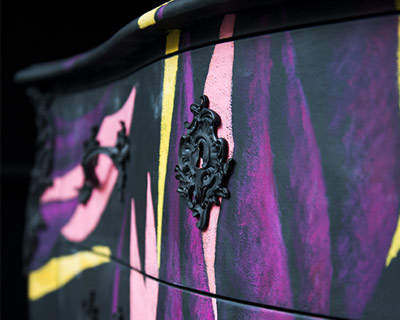 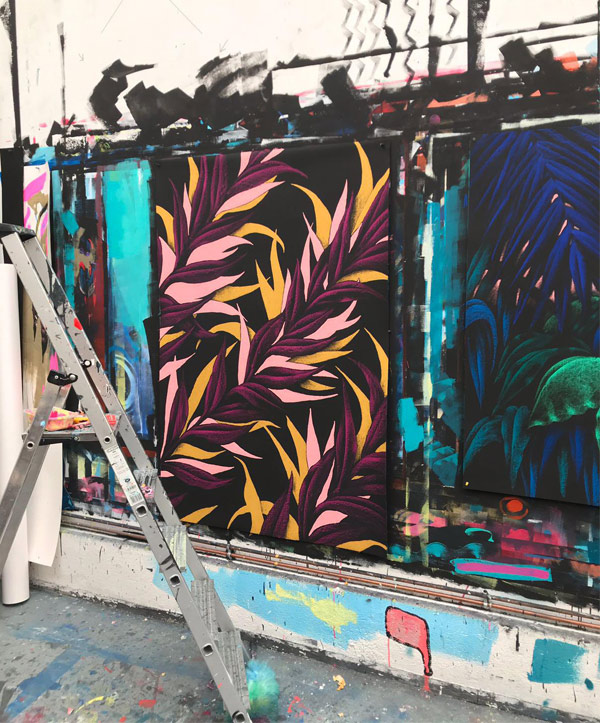 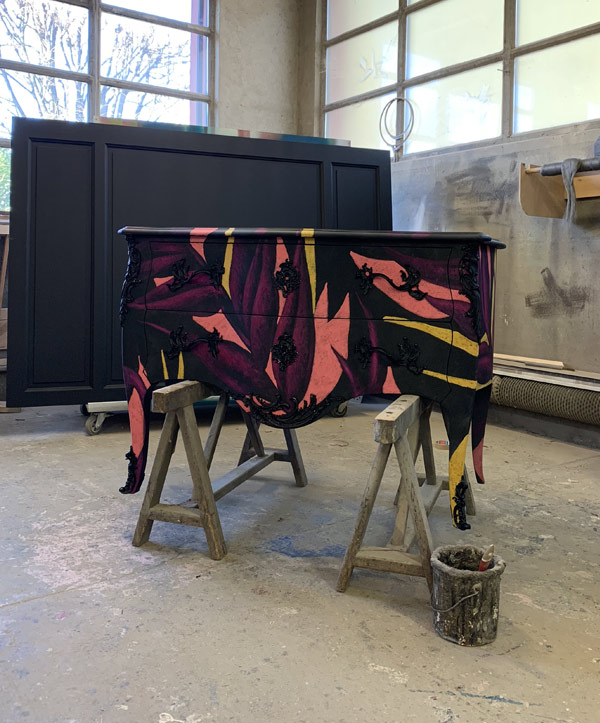 How did you feel about Moissonnier's proposal to collaborate ?
I don't discriminate between the fine arts and the decorative arts. In the past, my drawings have been reproduced on Sèvres porcelain ware, ceramic, as well as fabric and rugs. Moissonnier's proposal was really the perfect response to my desire to explore new media. And it was a great pleasure to get to do it with people who are both accessible and attentive to my work.

What where your inspirations for "Pourpre", the painting on which you based your design for the new 573 chest of drawers ?
Pourpre is a drawing reworked from a sketch I made while I was in residence in Pondicherry. It was evidently influenced by the plants and colours that were everywhere there - fuchsia pink and ochre for instance. But I was also trying to capture a sense of weightlessness, something that was a sort of reaction to the overly saturated Indian jungle.

What is your opinion of the work that Moissonnier did on your design ?
It is never simple to just hand your design over to someone else to have them reproduce it. But I was truly awed by the result. I am especially impressed by how well they managed to render the look of pastel, its unctuousness, and the very characteristic gradation effect I use in all my drawings. 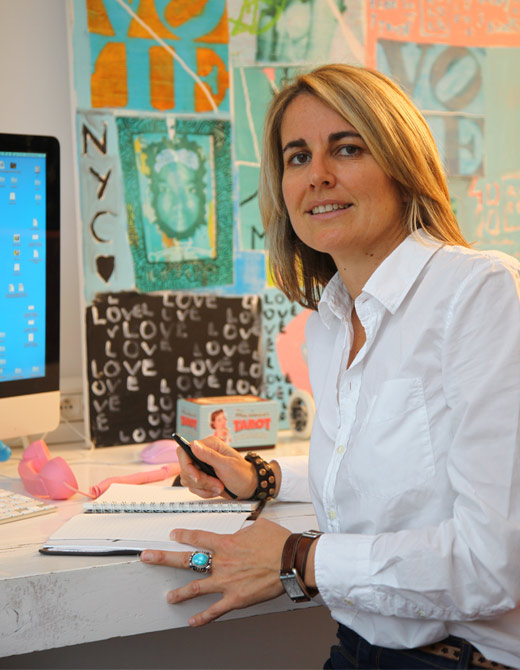 What cas is that made you want to work with Julien Colombier ?
Julien Colombier's expression is a subtle mix of two influences that I have always been very fond of. Street art, which my husband and I collect, and nature, which is the basis of cabinetmaking. What is also interesting is the way his experiments with colour echo Moissonnier's heritage. It just matched perfectly with our desire to expand our own colour collection.

How did the workshop transcribe his drawing ?
This is the first time Moissonnier has ever issued a design that was not our own. Julien Colombier's drawing was reproduced with paintstaking attention to detail. And it was very exciting for our cabinetmakers. The drawing was painted by hand on each of the seven pieces. The greatest challenge was to find the right technique to suggest the appearance of oil pastels, which is beautifully rendered.

Last year, you presented a soe cabinet designed in collaboration with Michel Perry. This year, a chest of drawers based on a drawing by Julien Colombier. Are you considering other collaborations for the future ?
The perspective that outside creative professionals bring to our know-how unlocks new creative paths. It is a practice that we have come to appreciate and will repeat in the future, depending on the people we meet.